Strong additions to the imagePRESS V Series coming soon include the imagePRESS V1350, designed to offer high productivity, durability, and stability for the commercial print segment; and the imagePRESS V900 Series, which is designed to elevate automation while helping produce brilliant color with ease. Canon U.SA., Inc., a leader in digital imaging solutions, will be featuring these upcoming additions at PRINTING United Expo from the Las Vegas Convention Center.

Both the imagePRESS V1350 and imagePRESS V900 Series additions bolster a stellar production lineup that already includes the imagePRESS V1000 digital press introduced earlier this year. The entire imagePRESS V family can help enable both commercial and in-house print service providers with their operations by providing them with the ability to create a wide array of applications. The new engines are also designed to improve productivity with automation features and produce repeatable and predictable output.

To get the most from the imagePRESS V Series color digital presses, production environments have the ability to utilize print management applications such as the PRISMAremote Manager,1  providing the ability to access real-time status of items such as job schedules and remaining paper levels in working to improve efficiency.

The imagePRESS V1350, which will replace the imagePRESS C10010VP, offers a new fusing technology that can allow for print speeds of up to 135 pages-per-minute (letter), an increase of up to 35 percent faster compared to its predecessor model. The POD-SURF (Surface Rapid Fusing) technology assists in optimizing thermal efficiency and variable pressure to achieve high productivity with brilliant quality.

Portions of the internal environment have been reengineered to help the imagePRESS V1350 remain reliable and stable at high speeds across long production runs. Durability enhancements made to the feeding, registration, and image transfer areas aid production environments by producing crisp, detailed, and vivid output on a wide range of stocks.

imagePRESS V1350 – offers a new fusing technology that can allow for print speeds of up to 135 pages-per-minute (letter), an increase of up to 35% faster compared to its predecessor model.

Among the highlights of the imagePRESS V900 Series is its ability to capitalize on having the smallest footprint among the imagePRESS V portfolio, incorporating crucial core technologies while fitting in tight spaces.

The imagePRESS V900 Series consist of three speed models: V900, V800 and V700, allowing customers to customize their configuration with numerous optional feeding and finishing accessories to allow print establishments to expand their offerings of new and lucrative applications. It also has the ability to auto-duplex stocks up to 30” in length2 allowing print providers to offer new applications such as long edge booklets, 6-panel brochures, and signage to their clients2. 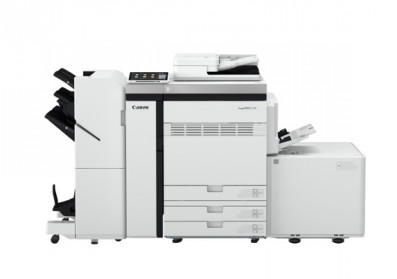 imagePRESS V900 Series – this series consists of three speed models: V900, V800 and V700, allowing customers to customize their configuration with numerous optional feeding and finishing accessories to allow print establishments to expand their offerings of new and lucrative applications.

The imagePRESS V900 Series supports stocks up to 130 lb. Cover2 on a variety of paper types, making it versatile for jobs ranging from high-quality marketing collateral, to direct mailing applications including envelopes. With printing speeds up to 90 pages per minute (letter) and a wide array of in-line finishing solutions2, jobs can be quickly fulfilled to meet today’s production deadlines.

Additional automation is brought to routine, crucial tasks via the Automatic Document Feeder (ADF)2 with the ability to improve registration alignment, color density, and secondary transfer with just a few taps on the intuitive interface3.  Designed to minimize the need for manual adjustments and reduce operator involvement can limit errors and get the press ready for production sooner.

With numerous print controller options available, including the PRISMAsync print server, the imagePRESS Server N500 and P400 both powered by the Fiery FS500 Pro system software, and the imagePRESS Printer Kit, print shops can choose the solution that meets their workflow requirements.

“The next generation of imagePRESS printing solutions are bringing an increased level of automation and new capabilities to our customers,” said Shinichi “Sam” Yoshida, executive vice president and general manager of Canon U.S.A., Inc. “We are excited to see how the new imagePRESS V family of devices can support print providers in expanding their business to increase efficiency and minimizing operator interactions through the new automation features and remote management features.”

Also on display at PRINTING United Expo will be the imagePRESS V1000 color digital press, which can print up to 101 images per minute (letter), even on coated and heavy stocks up to 400 gsm2. It also places a strong emphasis on automation and makes tasks such as color repeatability and registration alignment simplified for print establishments looking to produce a wide range of applications from direct mail and business cards to booklets, posters, and other creative marketing collateral.

The imagePRESS V900 Series will replace the imagePRESS C910 Series and is currently scheduled to be available through Canon authorized dealers starting in December 2022.4

The imagePRESS V1350 color production press is currently scheduled to be available through Canon authorized dealers starting in February 2023.4

† Number of patents for 2021 are based on figures released by IFI CLAIMS Patent Services. Figures for 2005 to 2020 are based on information issued by the United States Patent and Trademark Office.

1 Function available if the PRIMSAsync print server is purchased and used.

3 Automated features will not be supported by PRISMAsync at launch.

4 Please note that these devices are not available for sale or use in the U.S. or elsewhere.

Availability and specifications are subject to change without notice.