With nearly 20 million guns purchased, 2021 was the second-busiest year on record for firearm sales. Online, some claim the federal government may be secretly tracking those gun owners.

“BREAKING: ATF gun registry includes almost 1 BILLION firearm records,” reads a Jan. 31 Facebook post from Gun Owners of America, which bills itself as a “no compromise” gun lobbying group. “Make no mistake – this is Biden’s next step towards gun confiscation.”

The post accumulated more than 200 shares within three days. As evidence, it links to a Jan. 31 article from the Washington Free Beacon, a conservative political website.

Citing a letter sent to lawmakers by the Bureau of Alcohol, Tobacco, Firearms, and Explosives, commonly known as ATF, the Free Beacon reported the agency “manages a database of 920,664,765 firearm purchase records.” Gun Owners of America, as well as some conservative politicians, took that story to mean the ATF is maintaining a registry of gun owners.

It’s true that ATF does possess hundreds of thousands of firearm records, most of which have been digitized. And federal law prohibits a national gun registry.

But those records are not stored in a searchable database or a format consistent with a registry, as claimed.

“ATF does not maintain a federal gun registry for firearms that fall under the Gun Control Act, and none of the records ATF maintains relating to those firearms may be used to create such a registry,” Carolyn Gwathmey, a public affairs officer at the agency, said in an email.

Here’s a quick rundown of the facts:

The records alluded to in the Facebook post come from firearm dealers, manufacturers and importers that have gone out of business.

Under federal law, businesses federally licensed to deal in firearms, including collectors and pawnbrokers, must maintain certain records on guns transferred to other businesses or to individuals who are not licensed, Gwathmey said. When a licensed business closes, they are required to send those records to the ATF.

“While dealers are normally the custodians of these records, when dealers shut down, ATF becomes the custodian by default – and by law,” Kristin Goss, professor of public policy and political science at Duke University, said in an email. “These records allow guns used in crime to be traced to the original point of sale, facilitating law enforcement investigations.”

The ATF’s National Tracing Center is responsible for processing and maintaining out-of-business records. Gwathmey said the division processes an average of 5.5 million records per month.

Those records used to be stored using decades-old microfiche technology. But starting in 2011 and ending in 2017, film records were converted to digital images, according to April Langwell, chief of the ATF’s public affairs division.

“Searching for records on microfilm/microfiche had become an outdated process,” she said in an email. “The film readers were becoming expensive to purchase and maintain. Digitizing the records actually increased the quality of the images.”

In an email to USA TODAY, Carson Steelman, a spokesperson for Gun Owners of America, cited the same ATF letter the Free Beacon included in its article.

“The ‘nearly a billion’ comes from the government’s own number,” she said.

The letter indicates that, as of November 2021, nearly 866 million of the agency’s more than 920 million out-of-business records were digitized. That’s because, at any given time, there are tens of thousands of paper records waiting to be scanned, Langwell said.

But this digitization doesn’t mean the ATF has created a searchable database. Federal law prohibits the ATF from keeping the records in a searchable format.

Each time the ATF receives out-of-business records, they are scanned as “non-searchable, static images” that cannot be detected using optical character recognition, Langwell said. The records may only be accessed to perform a firearm trace.

“(ATF tracing) staff must review each (federal firearms licensee) record individually to locate information needed to complete a trace, and these records are only accessed to complete law enforcement trace requests,” Gwathmey said.

When a gun store goes out of business, the record of gun transactions it has maintained is turned over to the ATF for retention. The Free Beacon article said this practice “has contributed to the fears of gun advocacy groups and Second Amendment champions in Congress that the federal government is creating a national database of gun owners, which violates longstanding federal statutes.”

But gun policy and law experts told USA TODAY what’s described in the article is not a gun registry.

“Yes, that database includes names of the purchasers of guns used in crimes. But that is far from a registry,” Daniel Webster, director of the Johns Hopkins Center for Gun Policy and Research, said in an email. “A registry is what Maryland and California and a few other states, have where state police record information on gun purchasers/owners and the specific guns that they own.”

There is no universal gun registration or licensing requirement for individuals at the federal level, according to the National Rifle Association, a gun advocacy group.

In 1986, Congress passed the Firearm Owners’ Protection Act. The law prohibits “any system of registration of firearms, firearms owners, or firearms transactions or dispositions” on the federal level.

“There is no gun registry,” Adam Winkler, a law professor who specializes in gun policy at the University of California-Los Angeles, said in an email. “There is a database of sales records from federal gun dealers who’ve gone out of business and had to turn over their sales records.”

Webster said there is “no indication” the ATF “ever have or will put those pieces together to begin a registry.” Goss agreed.

“I have seen no credible information that ATF is using the out-of-business records except for the intended, legal purpose of aiding in specific gun-trace requests associated with specific criminal investigations,” she said.

Based on our research, we rate MISSING CONTEXT the claim that an “ATF gun registry” includes nearly 1 billion firearm records, because without additional context it may be misleading.

While the ATF does have hundreds of thousands of records, they are not part of a federal “gun registry,” which is illegal under federal law. Instead, the ATF keeps records of firearm transfers sent to the agency by federally licensed dealers that have gone out of business. Those records are stored as digital photos – but they are not searchable and may only be accessed individually to assist in criminal investigations.

Thank you for supporting our journalism. You can subscribe to our print edition, ad-free app or electronic newspaper replica here.

Our fact-check work is supported in part by a grant from Facebook. 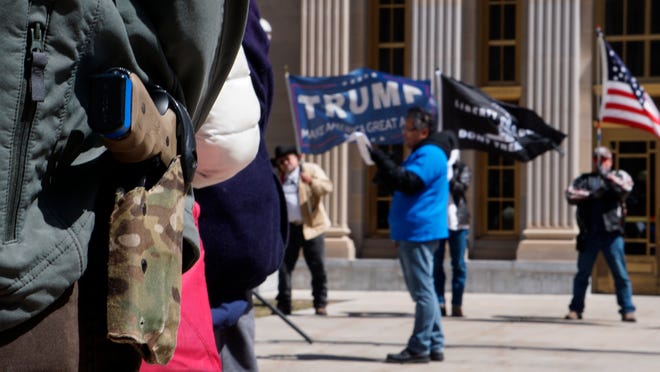