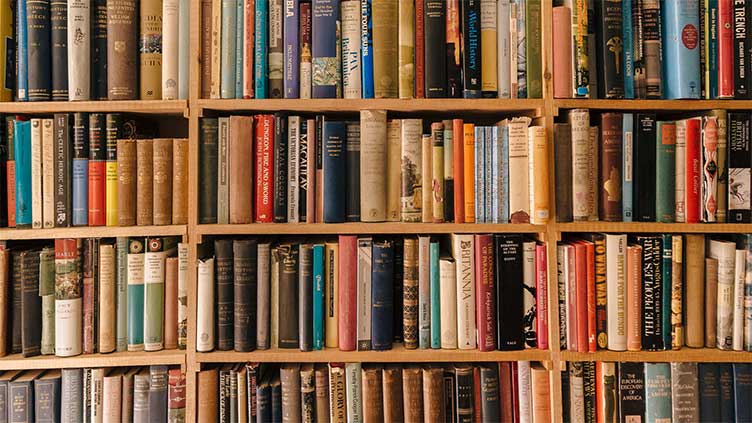 FAISALABAD, (APP) – The prevalent notion that “book reading culture is fading away” stands in contradiction with the ground reality as the number of book readers have been increased with rising number of published books and electronic gadgets.

Though the readers of classical literature (hardcopy lovers) have reduced as the material had been presented to them in audio-video form. But the online mode has made reading easy, accessible, and cost effective.

The most modern, efficient and more convincing instruments which were introduced in near past to provide basic information to the readers and viewers have captured only those readers who read books for entertainment. Only this kind of readers have switched over to the audio-video modes instead of printed material.

Similarly, enrollment in schools, colleges and universities has also increased to manifold which has been reciprocally enhancing the number of book readers every year. History shows that all types of knowledge were written by hand like Quran Pak, Tafaseer and Ahaadees. Muslim writers wrote more than 500,000 books on different subjects including medical (tibb), Astronomy, Botany, Zoology, Physics, Sociology, History, and all types of social and science subjects.

During this critical period, the western nations translated hand-written manuscripts of Muslim scholars into English and other languages which paved the way for advent of new scientific era in Europe which was passing through the dark ages.

After at least 1000 years, Muslims realized this blunder and started installation of printing machinery which started printing and publishing of knowledge as envisioned by the Muslim scholars. The literacy rate in Muslims always remained low.

However, Sir Syed Ahmad Khan and others motivated Muslim students to get knowledge of modern sciences including English as most of knowledge was available in English language.

In Pakistan, the literacy rate has always remained low but book reading remained a passionate hobby of a large number of people as books were comparatively cheap and regular source of information for the readers.

There were a number of libraries in the city as many people had established libraries in their homes to facilitate the masses with books for reading on cheapest charges till 70s-80s. Later, these libraries were vanished as these were facilitating the readers only with provision of books not with book reading atmosphere.

Talking to APP, Sardar Sajid Aleem, a working Journalist by profession said that “Paisa Akhbar” and other Muslim publishers have started producing Urdu literature. It was the start of book reading culture in the sub-continent.

With the advancement of technology as printed material became costly, people switched over to radio and then towards Television (TV) or audio-visual appliances. “Now,we are living in the age of social media in which android mobile phones were playing a key role in providing real-time information to the people”, he added.

He said that books were also available online and people could select a book for their reading. Generally, people get printout of the book which was very costly.

“Although government and academic circles are critical of fading hobby of book reading, yet I think it is a natural phenomenon as audio-visual impacts are more effective than the reading only”, he said.

A spokesperson of Municipal Library situated at Nazriyya Pakistan Chowk Narwala Road outside Bhowana Bazaar said that it was a wrong perception that book reading culture was fading away completely. The number of registered book readers in this library was increasing every year. One year ago, the registered members were about 3000 and this club has jumped to 3500 this year.

In this library, more than 32,000 books on different topics were available for book readers including common citizens, students, scholars and researchers. At present about 150-200 books were issued to registered members on daily basis whereas this number was 100-125 one year ago.

The library management arranged aid-conditioned atmosphere for book readers in addition to the facility of internet and wifi along with comfortable chairs and tables. Computers were also being arranged in this library to facilitate the book readers especially researchers, the spokesperson added.

This similar situated was also noticed in Allama Iqbal Library situated at Zila Council Chowk which was providing membership to book readers at very nominal fee of Rs.500/- only.

In-charge Allama Iqbal Library Mirza Muhammad Aslam told the news agency that there were 36783 books on all topics in this library. “This library has also very old and rare books to facilitate the researcher”, he added.

He said that the number of registered members was increasing every year. At present, the library was undergoing some repair and renovation works and after its completion, the readers would be provided most conducive atmosphere for book reading. Air-conditions were also arranged in addition to the facility of internet and wifi for visitors in the library, he added.

A shopkeeper/stall holder in Aminpur Bazaar, Ghulam Shabbir said that about 80% decrease was witnessed in the habit of purchasing books. “Five years ago, about 150 buyers visit his shop/stall to purchase books, now this number remained 30 only, he said, adding that all this happened due to high cost of printed material as well as availability of books and other literature online in PDF forms.

The purchaser now prefers to get huge quantity of literature online free of cost or even at very nominal price instead of buying it from a shop or stall by spending thousands of rupees, he added.

Michael Dirda picks his favorite crime and mystery novels of 2022

Made in Cookware Just Launched a Cast Iron Skillet