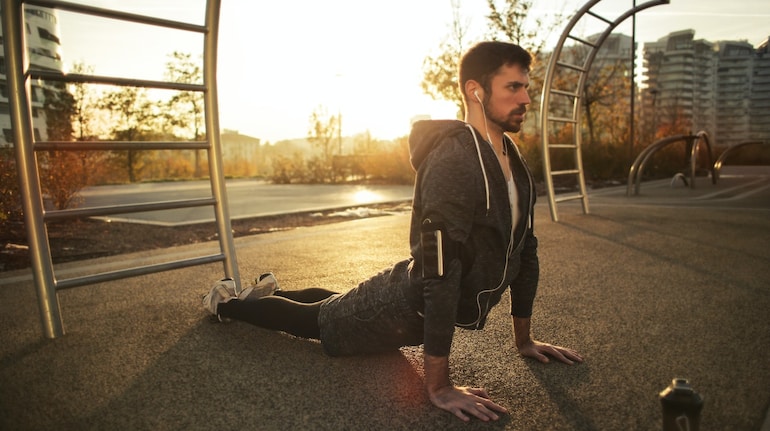 Asanas like the cobra pose and bow pose help to strengthen the back and increase flexibility in the spine. (Representational image: Andrea Piacquadio via Pexels)

If you have been with us till now and followed the plan for the first and second months, both you and your body should be ready to move on to the next phase of training.

This is the final month of prepping the body for more advanced yoga practice. However, in order to do that you will still need to practice regularly, show up on the mat at least thrice a week and gradually attempt more difficult asanas and postures.

When it comes to yoga, there are no shortcuts, explains Karthik Kashyap, a Bengaluru-based yoga teacher who has a PhD in yoga and philosophy from Mangalore University. He understands that life can throw curve balls and put your best laid routine in jeopardy when he says, “When you say you would do one hour of yoga every day, you are setting yourself up for failure… Instead, you need to be flexible and make sure you practice yoga even for 10 to 20 minutes whenever you find time on the days that you are caught up with work or chores,” he says.

The secret to success here is consistency.

The first trimester’s training plan is to prepare and familiarise you, both physically and mentally, for and with yoga and building the base for it. “The actual practice begins in all earnest this month onwards. Most of the stretching, flexibility and mobility asanas and moves that you did in the first two months will not be repeated in the actual practice anymore. This month we start focusing more on strength and balance while flexibility asanas and drills are focused on the big muscles such as back and hips in order to make them more supple and open them up,” explains Kashyap.

Hence, this month you would be doing a lot of pigeon (Eka Pada Rajakapotasana), wheel (Chakrasana) and bow (Dhanurasana) poses, all of which are advanced postures that target the big muscles in your back and hips. 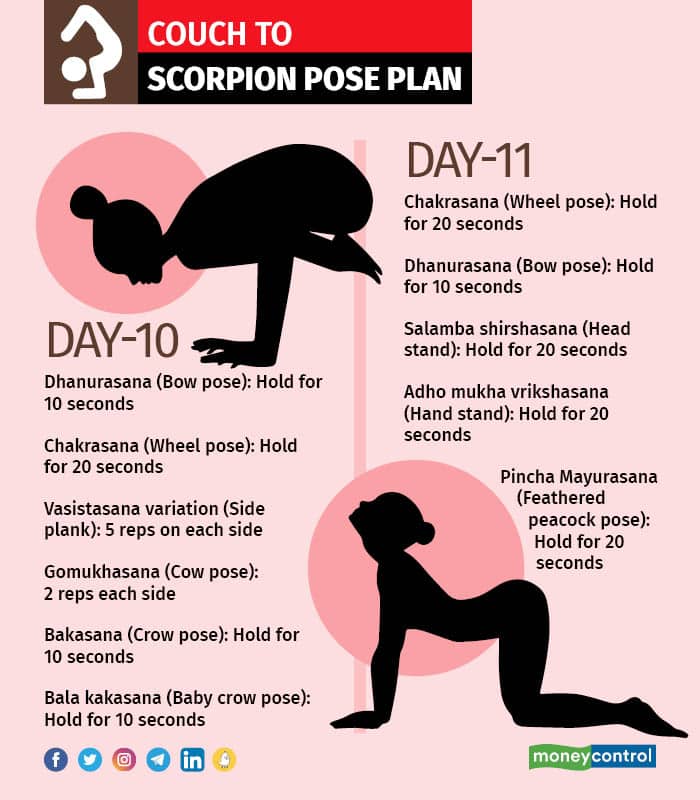 The training wheels come off now. Starting now, you don’t just go through the daily training plan set out here just once. You do all the asanas at least twice and if you are progressing well, do the whole routine three to four times. As they say, practice makes perfect. Also, the multiple repetitions would help you reach your goal much faster as you are likely to improve a lot quicker too.

This month onwards we also shift our focus to building strength in our elbows, shoulders and spine; in an inversion it is these three body parts along with the wrist that bear your weight.

In the Scorpion pose, the spine, elbow and shoulders form the base on which you balance your body. It is common to struggle in the beginning, says Kashyap. “When you start out, you don’t really have the balance, you don’t know what is the best alignment and placement of your elbows and palms and nor do you know what happens when the blood rushes to your head during an inversion. This is but natural because we were born to stand on our feet with the head on top and feet underneath us. We are literally turning this law of nature on its head while doing the Scorpion pose,” he says.

Kashyap suggests that all the headstands, hand stands and other inversions be practised close to a wall, using it for support whenever needed. As for where and how to place and align your elbows and palms, you would have to try a lot of different alignments and placements before you figure out what works best for you.

All inversions in this plan start with short durations of 10 seconds and gradually increase once are at ease with these positions. “Even when you move to longer holds during the inverted postures, do it against a wall. The wall works wonders for your confidence and makes you feel safe. The fear of falling is low because you know the wall will not let that happen. When you hold the inversions for longer periods of time, your strength and balance improve,” Kashyap adds.

Healing Space | How much violence should you put up with in a relationship?

Why no federal oversight on cryptocurrencies? | Op-Eds