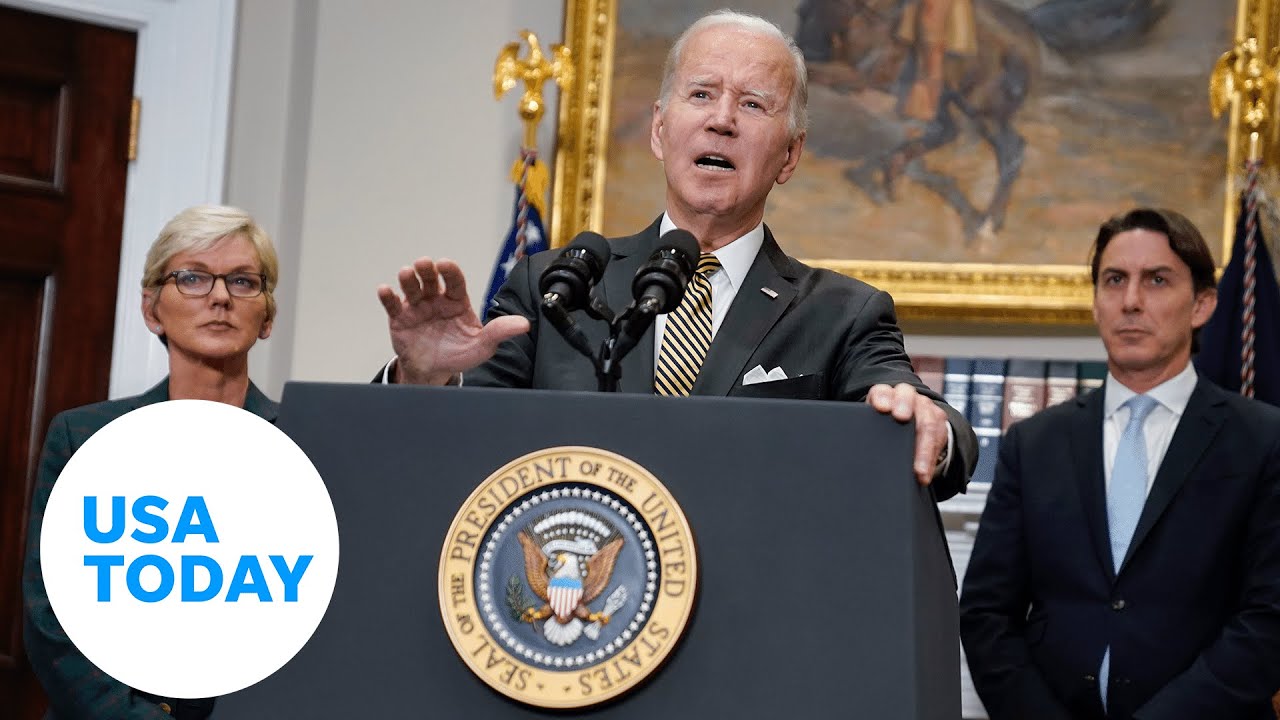 WASHINGTON – As gas prices remain stubbornly high before the midterms, President Joe Biden called on American companies to increase domestic oil production and unveiled a series of measures aimed at bringing down costs at the pump.

“They’re not falling fast enough. Families are hurting,” Biden said in remarks at the White House. “You’ve heard me say it before, but I get it.”

In a push to strengthen energy independence at home, Biden also launched a new initiative to boost the production of critical minerals used in batteries for electric vehicles, as well as laptops and smartphones. The Biden administration awarded $2.8 billion in federal infrastructure grants to 12 manufacturing companies with plans to produce lithium and other minerals critical for batteries.

Efforts come as Biden faces increasing pressure to find answers to lower gas prices that have flatted after decreasing over the late summer. It has strengthened headwinds for Democrats as they look to hold onto power of the Senate and House in next month’s midterm elections.

Biden wants to revive manufacturing ‘in a big way’

President Joe Biden said the United States is bringing back manufacturing “in a big way” after announcing a new federal initiative to accelerate the production of critical minerals for batteries.

“Where in heck is it written that we can’t be a manufacturing hub of the world?” Biden said Wednesday when announcing the new initiative.

Over the past several months, Biden has made domestic production of batteries a top priority amid historic inflation and rising gas prices. He invoked the Cold War-era Defense Production Act in April to boost the U.S. production of minerals used in batteries.

During his remarks, Biden took a dig at China, saying the country has controlled nearly half of global production on battery components and critical material, but that doesn’t mean their technology is better.

“China’s battery technology is not more innovative than anyone else’s,” Biden said. “In fact, our national labs, our research universities, our automakers led the development of this technology here in America.”

He added that China holds a “significant portion of the market” because of unfair subsidies and trade practices.

“Today we’re stepping up … to hold, really take it back, not all of it but bold goals… and actions to make sure we’re back in the game in a big way,” Biden said.

Democrats praise Biden for releasing oil, while Republicans say the move was political

“The President is using common sense strategies to stabilize the market and shore up our own reserves,” Rep. Frank Pallone, Jr., D-N.J., and chairman of the Energy and Commerce Committee said in a statement.

Sen. Jack Reed, D-R.I., also said in a statement that “President Biden is standing up to Putin and OPEC and preventing them from manipulating our oil markets and war profiteering.”

More:Where are the US strategic oil reserves? Here’s how many barrels remain and where they are

However, Republican lawmakers accused Biden of making a political decision by releasing the oil ahead of the midterm elections.

“Our Strategic Petroleum Reserve is there for real emergencies, not political ones,” Rep. Mark Green, R-Tenn., wrote in a tweet.

Sen. Joni Ernst, R-Iowa, also said the act is “a temporary escape hatch from the results of refusing to unleash American energy production.”

Biden said the U.S. must increase production of oil domestically, pushing back at a frequent criticism of Republicans who argue the president has stood in the way of more drilling in the U.S.

“We need to responsibly increase American oil production without delay or deferring our transition to clean energy,” Biden said. “Let’s debunk some myths here. My administration has not stopped or slowed U.S. oil production.”

But he said he’s heard from oil companies worried that if they invest in additional oil production they won’t be able to sell their product at a competitive price if demand were to go down.

“Well, we have a solution to that,” Biden said, pointing to plans to refill the Strategic Petroleum Reserves by repurchasing oil at $70 a barrel beginning in 2024.

Gas prices are declining — but not enough, President Joe Biden said Wednesday when he announced he’s releasing 15 million barrels of oil from the nation’s emergency reserves.

“They’re not falling fast enough. Families are hurting,” Biden said. in remarks at the White House. “You’ve heard me say it before, but I get it.”

Biden blamed “the choices made by other countries” for price volatility, though not specifying, as he has before, Russia’s invasion of Ukraine and the recent decision of OPEC and its oil-exporting allies to cut oil production by 2 million barrels per day to boost prices.

He denied that his action, coming weeks before next month’s midterm elections, is politically motivated.

Biden said the government will begin refilling the reserve when the price hits a level that is both good for taxpayers and enough of an incentive for any oil company worried that investing in additional production today won’t pay off for tomorrow.

At the same time, however, Biden called on oil companies to make sure the price at the pump reflects the true cost.

“You’re sitting on record profits,” Biden said, “and we’re giving you more certainty so you can act now to increase oil production now.”

After Saudi Arabia led a decision by OPEC+ to cut oil production last week, Democratic lawmakers were quick to call on President Joe Biden to reevaluate the U.S. relationship with the Arab country.

Biden last week said he would take a closer look at the United States’ relationship with Saudi Arabia following the OPEC+ decision.

“I am in the process, when the House and Senate comes back, there’s going to be some consequences for what they’ve done with Russia,” Biden said in an interview with CNN last week.

While Biden prepares to tout his infrastructure law Wednesday, some transportation and environmental advocates question the impact it will have on addressing climate change, according to a USA TODAY analysis of experts.

While the law includes $7.5 billion for a national network of electric vehicle stations and $105 billion for transit, there’s also $110 billion to repair bridges and roads.

Because of continued prioritization of roads and cars and a lack of accountability at the state level, they say the bill won’t revolutionize the transportation or energy sectors, which together account for more than half of U.S. greenhouse gas emissions.

“Most Americans do not have access to transit or certainly not good transit,” said Beth Osborne, director of the national nonprofit Transportation for America. “We have a lot of work to do.”

Biden launches initiative to boost production of battery minerals in US

President Joe Biden is set to announce the creation of a new federal initiative Wednesday to accelerate the production of critical minerals for batteries in the U.S. in a push to combat bottled supply chains and compete with China.

Biden will discuss the effort in an afternoon address with Energy Secretary Jennifer Granholm, according to senior administration officials who discussed the plans with reporters on the condition of anonymity.

The initiative, led by the White House and housed at the Energy Department, will focus on the production of lithium, cobalt, nickel, graphite and manganese, minerals used in electric vehicles, laptops, smartphones and other products.

More:The ‘white gold’ rush: Why lithium demand is skyrocketing and what it means for consumers

The effort relies on pooling together federal funds, including more than $135 billion from the federal infrastructure law and Inflation Reduction Act, and envisions partnerships with the private sector to boost battery production.

The Biden administration also plans to support “faster and fairer permitting,” according to officials, for the extraction processing of minerals and recycling projects.

Biden has made the domestic production of batteries a top priority amid historic inflation and rising gas prices. In April, he invoked the Cold War-era Defense Production Act to boost the U.S. production of minerals used in batteries.

President Joe Biden is releasing more oil from the nation’s reserves into the marketplace, a small amount compared to how much is consumed daily but enough to give him the headlines he hopes will provide a political boost weeks before the midterm elections.

The 15 million barrels of oil that the Energy Department is selling in December is the final chunk of the 180 million barrels that Biden, in March, directed be released from the Strategic Petroleum Reserve to moderate spiking gas prices.

The move was intended to serve as a bridge until the end of the year, when domestic production would ramp up. Officials said production has increased but is still below its pre-pandemic level.

Critics say tapping the reserves has a small effect on prices at the pump but can have big consequences if not enough remains to protect the United States in a crisis – such as a pipeline disruption, oil embargo, hurricane or other natural disaster.

Still, the White House says the approximately 400 million remaining barrels are more than sufficient to tap further, if necessary.

Ancient coin could provide proof a Roman emperor existed after all

Black-naped pheasant-pigeon, not seen since 1882, has been spotted