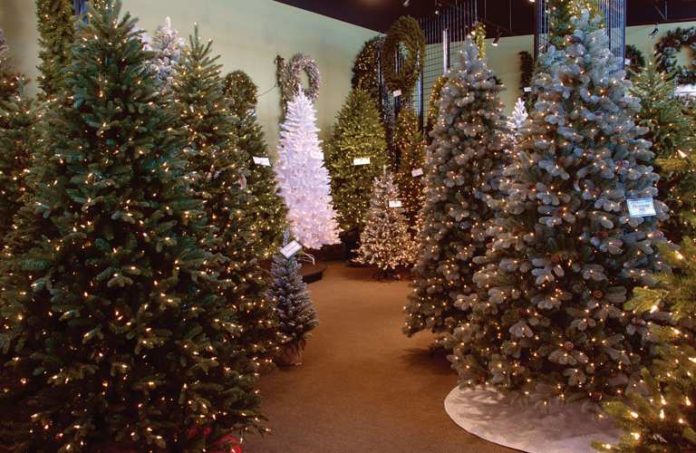 After supply chain issues limited the availability of artificial Christmas trees a year ago, Chris Butler — the CEO of Cranford-based National Tree — made sure the company would be prepared for 2022.

Simply put, he never stopped ordering product from China, the makers of 95% of the market.

“Because we were only able to get a portion of our goods (last season) and we didn’t know what the shipping situation would be like this year, we decided to keep shipping,” Butler said. “We brought in a lot of goods from November, December and January — even into February.

“What that meant was, at the end of March, we had just a tremendous amount of goods. Way more than you would want as a Christmas company in March. Our warehouses were backed up.”

So far, stocking up hasn’t paid off.

“What we’re seeing this year is the reverse of last year,” he said. “It’s very easy, very cheap to get products from China and other places. A lot of companies had the same issues as we did, so there was an inventory glut. You look at companies like Target and Walmart, everyone’s talking about the glut they had and that they still have to some degree.”

This oversupply is just one part of the problem this year. The economy is the other, Butler said.

“With inflation, we’re finding out that artificial Christmas trees are indeed a discretionary item,” he said. “That’s making it tough.”

Tough on an artificial Christmas tree industry that is bigger than many people realize.

Eighty percent of consumers in the U.S. celebrate the holiday with a tree. And, of those, three-fourths now use artificial trees. Often, they have more than one. This year, they have plenty to choose from.

Butler talked with ROI-NJ about the artificial Christmas tree quandaries that have sprouted up this year. Here’s that conversation, edited for space and clarity.

ROI-NJ: Talk a little more about how the market is different this year.

Chris Butler: Consumer demand has slipped versus last year, or even two years ago. It’s a combination of things. The economy in general is tough. Another piece is that COVID accelerated our demand, particularly for online sales, a few years forward. But, this year, consumers are returning to stores, even if there’s a depression in overall demand.

ROI: What does that mean for the consumers who might still be in the market for one of these trees?

CB: What we’re doing is running a lot of promotions. You’ll see across all of our partner websites, we’re really seeing a lot of promotions that we’re running, and our retail partners are also running. Last year was the year of scarcity, so the message was to buy sooner than ever. This year, there’s plenty of supply. The message is that there’s some great deals out there — so be on the lookout for them.

ROI: Talk about the variety — and the quality — of the products customers might find out there this year.

CB: The quality of these artificial trees has definitely improved over time. The most popular size is an about 6- to 7½-foot tree. You can get one of those for just around $100. That’s a well-made tree, but the realism of the tree isn’t going to be close to the higher-end trees.

ROI: How do you mean?

CB: Once you get to around $250, you get the realism, as well as some functionality on the lights.

Once you go higher, you get something that’s loaded with lights with all sorts of functionality — bouncing lights, different colors. The quality of all of them is better than in the past. They’re easier to put together and to shape once they’re out of the box. We continue to innovate with technology: Bluetooth-enabled trees and lights that can dance with music or spell out names with an app.

ROI: Let’s wrap up the conversation with a bow: Are there any other Christmas tree trends on your list this season?

CB: The droughts in the West Coast, as well as wildfire, last year especially, definitely impacted the real tree market. Pricing on real trees has been going up as a result of that. You can pay $150 to $200 now for a real tree, which might be tough for someone to do every year.

There’s also a fungus affecting trees in South Carolina now. The farmers of these trees have to deal with lots of different issues today. Us in the artificial tree market have had our own issues. At the end of the day, I don’t see that market so much as competitors. We’re both fighting the good fight to bring some joy into peoples’ homes.