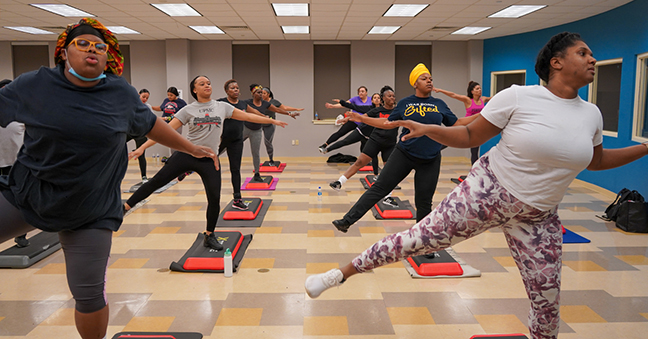 Monika Ross wasn’t too high on herself in early 2020.

“I was 220 pounds,” Ross said. “I was hypertensive. I was pre-diabetic. My cholesterol was 265. So, I was looking for programs to help me manage that.”

What Ross found was Healthy Harrisburg, a UPMC in Central PA program piloted by the UPMC Pinnacle Foundation and generously supported by Capital Blue Cross. The foundation’s mission is, in part, to provide the resources to help UPMC’s most vulnerable patients, to promote health and lifelong wellness in our communities, and to support the workforce so the region can attract, train and retain the best and brightest talent.

What Ross rediscovered through Healthy Harrisburg was her health, her happiness and herself. More than two years into the program, she has lost 53 pounds, and her hypertension, pre-diabetes and cholesterol are all under control.

“So, I’m still doing it,” Ross said recently before an “Xtreme Hip Hop” class that is a regular part of her Healthy Harrisburg regimen. “And because I’m still doing it, emotionally, I like myself now. When you’re 220, and you’re not feeling healthy, you kind of look at yourself differently.

“But now that I’m healthy, I’m happier. I like myself.”

Ross’ health journey is not unlike others who have joined Healthy Harrisburg, which offers regular line dancing, strength training, African dance and Xtreme Hip Hop step classes, along with an annual, citywide Juneteenth celebration.

And it’s all free, to all participants, thanks largely to Capital Blue Cross’ support.

“Monika’s results and those of so many others in Healthy Harrisburg exemplify why we so proudly support this program,” Shamash said. “It mirrors our mission to go the extra mile to improve access to healthcare and community health and well-being.” 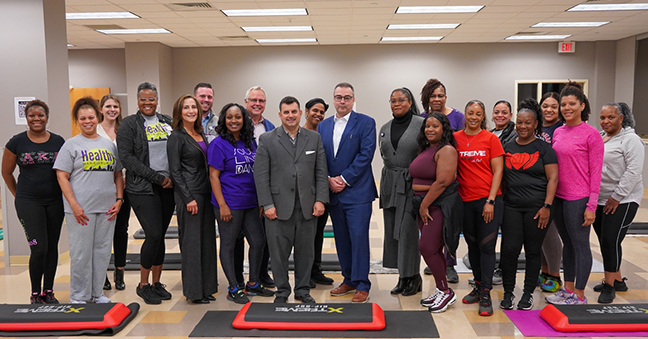 “It was wonderful to see a Healthy Harrisburg class in action,” Baverso said. “We’re truly grateful to Capital Blue Cross for helping bring this program to the public. Healthy Harrisburg isn’t just about fitness. It’s about challenging health disparities, and addressing chronic disease in underserved populations.”

“We have incredible stories,” said Adams, UPMC in Central PA’s project manager of diversity, equity, and inclusion. “We have one participant who actually e-mailed me and said that she was in an extremely depressive state before she started classes, (having) really suicidal thoughts. Now, she just recently got her MBA.”

Healthy Harrisburg began in 2020 with 25 participants. As a sign of the program’s ballooning popularity, it now serves between 130 and 150 participants per quarter, with the most recent enrollment reaching 152. Adams expects that number to grow in 2023. 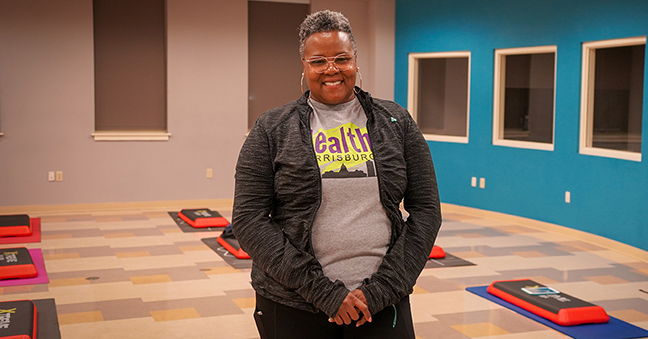 Thanks to regular health assessments of about 100 participants per quarter, Adams can rattle off additional stellar results: The last two cohorts have dropped over 250 combined pounds, and about 10% of participants have weaned off prescription medication.

“So, those victories are the things that we really look for.”

She said Capital’s contribution is key to keeping the program free, which in turn draws participants and, person by person, helps make Harrisburg healthier.

“We don’t turn anyone away,” Adams said. “So we’ve had people come as far as from York, Mechanicsburg and Hershey. And it’s those funds that allow us to open up this program and grow it.”

Nearly all Healthy Harrisburg registrants are women, and their closeness – through classes and other activities and conversation – builds a unique bond, said April Robles, another original member who started with the inaugural 2020 group.

Classes like instructor Robin Marshall’s Xtreme Hip Hop – designed for all ages and fitness levels, and with a focus on both physical and mental health – are a big reason why. 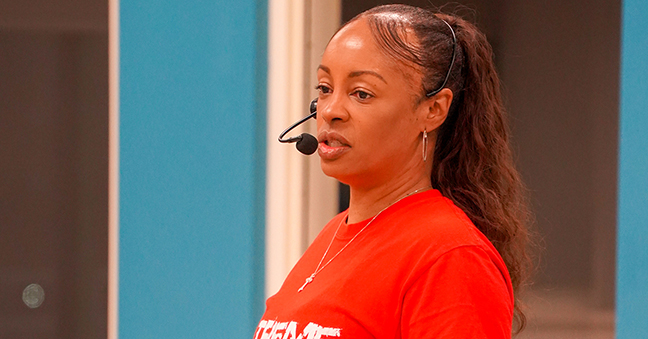 Which may explain why many participants have been with her since the program began. Robles is among them and is another case study in Healthy Harrisburg’s effectiveness.

She has lost 52 pounds since joining, lowered her blood pressure, and realized far more than physical benefits.

“I have anxiety, and this program has calmed it all the way down,” Robles said. “I’ve had no anxiety, no blood-pressure issues. Mentally, this is awesome.”

She said she’ll continue the program as long as it remains free.

“You meet a lot of good people in here, and it’s a very supportive group,” Robles said. “As long as this is open for me, I will be here and be a part of this. Because my whole life depends on this program, pretty much.”

For more health and wellness news and information that can benefit your business and employees, visit thinkcapitalbluecross.com.

If you like what we do, please support our work. Become a Friend of TheBurg!