Joe Biden on Tuesday will visit Arizona for the first time as president, appearing at a massive Taiwan Semiconductor Manufacturing Co. facility under construction in north Phoenix. TSMC has just announced it was expanding its investment in Arizona to $40 billion to produce cutting-edge semiconductors.

Biden was expected to discuss how TSMC’s new investments are an outgrowth of his economic plan.

$40B investment: Taiwan Semiconductor to vastly increase stake in Phoenix 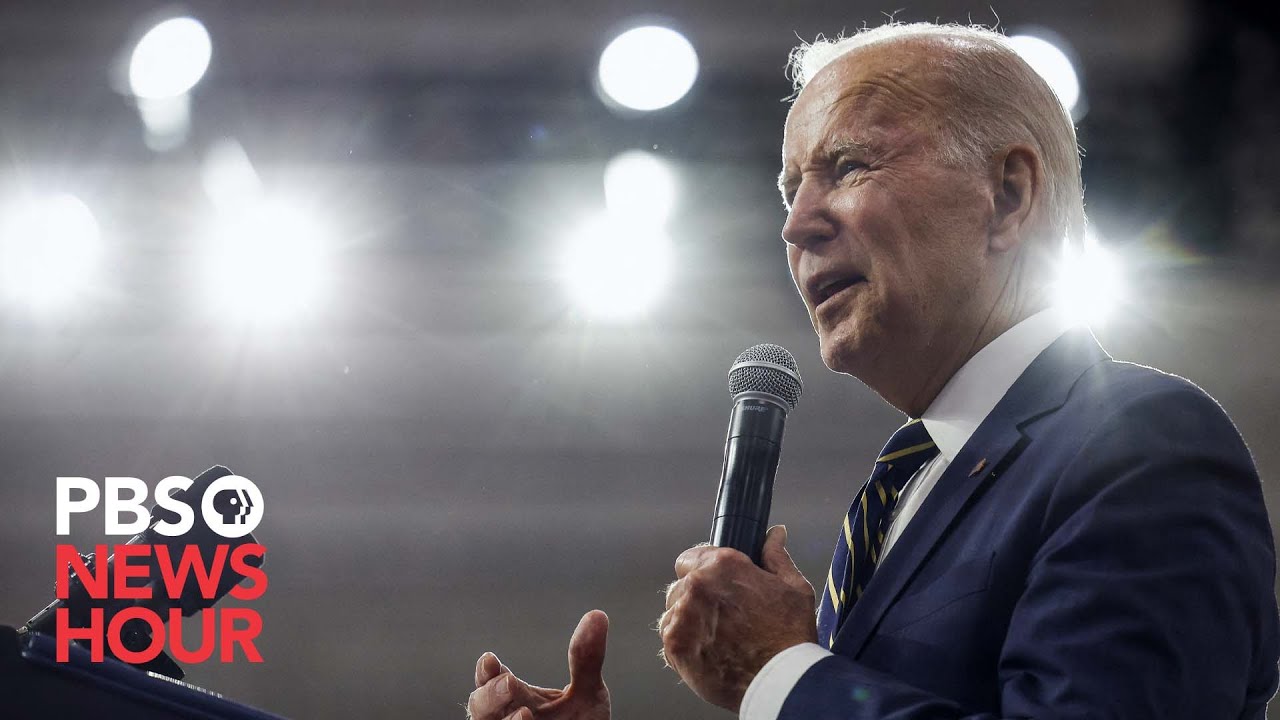 Air Force One was wheels up at 4:39 p.m. from Luke Air Force Base, marking the end of President Joe Biden’s visit to Phoenix and his first to Arizona since he was elected president.

Biden’s time in the state lasted about four hours and included one stop, a tour and remarks at Taiwan Semiconductor Manufacturing Co.’s new facilities in north Phoenix. Air Force One is headed back to Joint Base Andrews in Maryland, with Sen. Mark Kelly and Reps. Raúl Grijalva, Tom O’Halleran, and Greg Stanton aboard, along with multiple White House staffers.

In his remarks to the crowd gathered at a massive construction site in north Phoenix, President Joe Biden said what’s happening in Arizona matters across the country and the world.

He said Taiwan Semiconductor Manufacturing Co.’s investments, including the newly announced second fab, will make the most advanced chips on the planet and bolster the domestic supply chain.

“Where is it written that America can’t lead the world once again in manufacturing?” he said. “We’re proving it can.”

The president spoke for about 17 minutes.

He said the U.S. has a world-class workforce and credited the more than 3,000 union workers helping build the fab and the many more who will work in manufacturing as part of TSMC’s $40 billion investment in Arizona.

He also mentioned other investments his administration is supporting in the Phoenix area, ranging from a new taxiway at Sky Harbor International Airport to infrastructure in south Phoenix.

Biden said he wants Arizonans to feel pride, like he does, when they see cranes and workers. “What we can do together is just anything,” he said.

He highlighted two small business owners in attendance who will benefit from the TSMC investments. Patricia McKinley, whose small trucking company was affected by the pandemic, will have new projects to grow her business, Biden said. And Paul Sarzoza, who grew up as a migrant farmworker in Phoenix and now owns a custodial business, will have TSMC as his largest customer.

Biden began speaking at the TSMC site just after 2:15 p.m., thanking TSMC and those helping build a semiconductor industry in the United States.

At the top of Biden’s remarks, he thanked Arizona politicians for their work in making the chips investment and work possible.

He said he and Ducey are “different sides” but “share the same vision” of Arizona as a hub for the semiconductor industry. Biden congratulated Gov.-elect Katie Hobbs and said she’s in the right place, as the facility will be an “incredible asset to Arizona.”

He said the CHIPS and Science Act would not have happened without Sen. Mark Kelly, D-Ariz.. Biden also acknowledged Sen. Kyrsten Sinema, D-Ariz., who was not at the Tuesday event, and called her a “tremendous advocate” for Arizona.

“What a fantastic day today is,” Kelly said in remarks prior to Biden. “Mr. President, we’re glad to have you here to mark such an exciting milestone for TSMC and for the state of Arizona. This is a big deal for Arizona, today is a big deal, and it’s also a big deal for the entire country.”

Kelly said the U.S. is manufacturing 10% of the world’s microchips and none of the best chips. He said for years, politicians have talked about bringing manufacturing and supply chains back to the U.S., and now it’s happening.

“This facility will soon manufacture the most advanced microchips in the world and it’s going to be done right here in our state,” Kelly said, adding that it will create “tens of thousands” of jobs and new educational opportunities.

Arizona Gov. Doug Ducey spoke prior to Biden, expressing pride in the chance to showcase the state’s leadership in bringing semiconductor manufacturing back to the U.S.

“There is no better proof of how important this facility will be than by President Biden’s visit today,” Ducey said.

Ducey, a Republican, said he first met with TSMC leadership at the state Capitol in 2017 with the hope of bringing semiconductor manufacturing back to the United States and Arizona.

“Back then, this corner of Phoenix looked much different,” he said. “The buildings, the cranes, the work crews, none of this was here. A lot has transpired in Arizona and around the globe since then. But one thing has remained the same — Arizona continues to offer the premiere environment for advanced manufacturing anywhere in the world.”

He credited two federal administrations, Arizona’s congressional delegation, Phoenix, industry groups and others in supporting the CHIPS and Science Act and making the progress possible.

Ducey said Arizona will be the engine powering the industry’s growth.

“For us it’s such an exciting day to have TSMC continue to grow,” Christine Mackay, economic development director for the city of Phoenix, said. “Each time a company like TSMC looks to expand it’s a global competition, and we are glad TSMC chose Phoenix right off the bat.”

Phoenix has been working closely with the semiconductor manufacturer for years, Mackay said, but the expansion of the fab was not confirmed until Tuesday morning.

“We’ve been hopeful for a while,” Mackay said.

Before the company announced its plans in Phoenix, international companies represented a very small amount of Phoenix’s business prospects, she said. Now, international businesses make up about 30% of companies inquiring about Phoenix for an expansion.

“The more we put Phoenix on an international stage and in the global media, activity breeds activity,” she said.

12:27 p.m.: President Biden arrives in Arizona on Air Force One

President Joe Biden has landed at Luke Air Force Base, with wheels down just before 12:30 p.m. Arizona Gov. Doug Ducey was the first to greet the president after he descended the steps from the massive airplane. Military officials also were on the tarmac greet Biden.

Taiwan Semiconductor Manufacturing Co.’s new facilities are expected to have a positive effect on the U.S. military’s supply chain as well.

Semiconductors are used in a range of defense and military systems, including aerospace technology, telecommunications, missile defense, vehicles and other applications.

Growing the domestic supply of semiconductors will help ease the reliance on foreign powers, especially China, a global superpower in chip production, according to Rep. Greg Stanton, D-Ariz.

“The semiconductor industry is very reliant on China,” Stanton said.

Any products dealing with the U.S. military cannot be sourced from China, which is a way to ensure that items that go into U.S. military systems were not created by a foreign power, Stanton said.

“The president making this visit shows how important this particular industry is, not just for our economy, but for our security,” Stanton said.

Biden does not plan to visit Arizona’s southern border with Mexico during his first trip to the state as president.

During a roughly one-minute meeting with the press before leaving the White House on Tuesday morning, a reporter asked Biden why he would go to a border state and not visit the border.

“Because there are more important things going on,” Biden replied. “They’re going to invest billions of dollars in the new enterprise in the state,” he said, referring to TSMC’s investment in the Phoenix plants, according to pool reports.

Biden has faced repeated and strong criticism from Republicans over border security and not visiting the border to see the problems firsthand, including from Gov. Doug Ducey, who is expected to be at Tuesday’s event.

Ducey and other Republicans have said the Biden administration has failed to secure the border, leaving that responsibility to border states, prompting efforts like Ducey’s legally disputed placement of shipping containers along the border.

President Biden is expected to tout the success of his economic plan in improving conditions for Arizonans. Gov. Doug Ducey also has touted his administration’s efforts to provide a low-tax environment welcoming to businesses. Here are some of the new tech-related projects in the works in the state.

TSMC: TSMC’s, the world’s leading manufacturer of advanced semiconductors, announcement Tuesday brings its total investment in Arizona to $40 billion, one of the largest foreign direct investments in U.S. history. Its fabs are projected to create 10,000 high-tech and high-wage jobs, 4,500 of which will be direct TSMC jobs, as well as more than 10,000 construction jobs. TSMC will make some of the most advanced chips in the world for companies like Apple, according to the White House.

9 a.m.: ‘Get our friend Brittney Griner back home’

U.S. Rep. Greg Stanton is flying on Air Force 1 with President Joe Biden and others from Washington, D.C., to Luke Air Force Base before the event at Taiwan Semiconductor Manufacturing Company. Stanton said Monday he’s looking forward to talking with Biden about TSMC, water and Arizona’s water future and “my friend Brittney Griner, and how important it is for us to get our friend Brittney Griner back home.”

The Phoenix Mercury star was detained in Russia in February after authorities found two vaping cartridges with traces of cannabis oil. She was convicted in August, sentenced to nine years and transported to a notorious penal colony in the Russian republic of Mordovia.

8 a.m.: Apple CEO and other executives expected at the Biden event, plus senator, governor and other politicians

Taiwan Semiconductor Manufacturing Company’s founder, 91-year-old Morris Chang, and executives from TSMC’s suppliers and customers are expected to attend the event along with several Arizona politicians.

The new semiconductor plant rising on more than 1,100 acres in far north Phoenix is more than just another place to work.

“This will change our city forever,” Phoenix Mayor Kate Gallego said of the construction of the facility, which represents the largest foreign direct investment in Arizona history.

Taiwan Semiconductor Manufacturing Co. is expected to have an massive effect on the Phoenix area and statewide, through industry growth and job creation, further development of north Phoenix for both housing and commercial projects and cultural exchange between Arizona and Taiwan.

Companies that supply TSMC have been flocking to the Phoenix area, and across the state more broadly, to be near its factory.