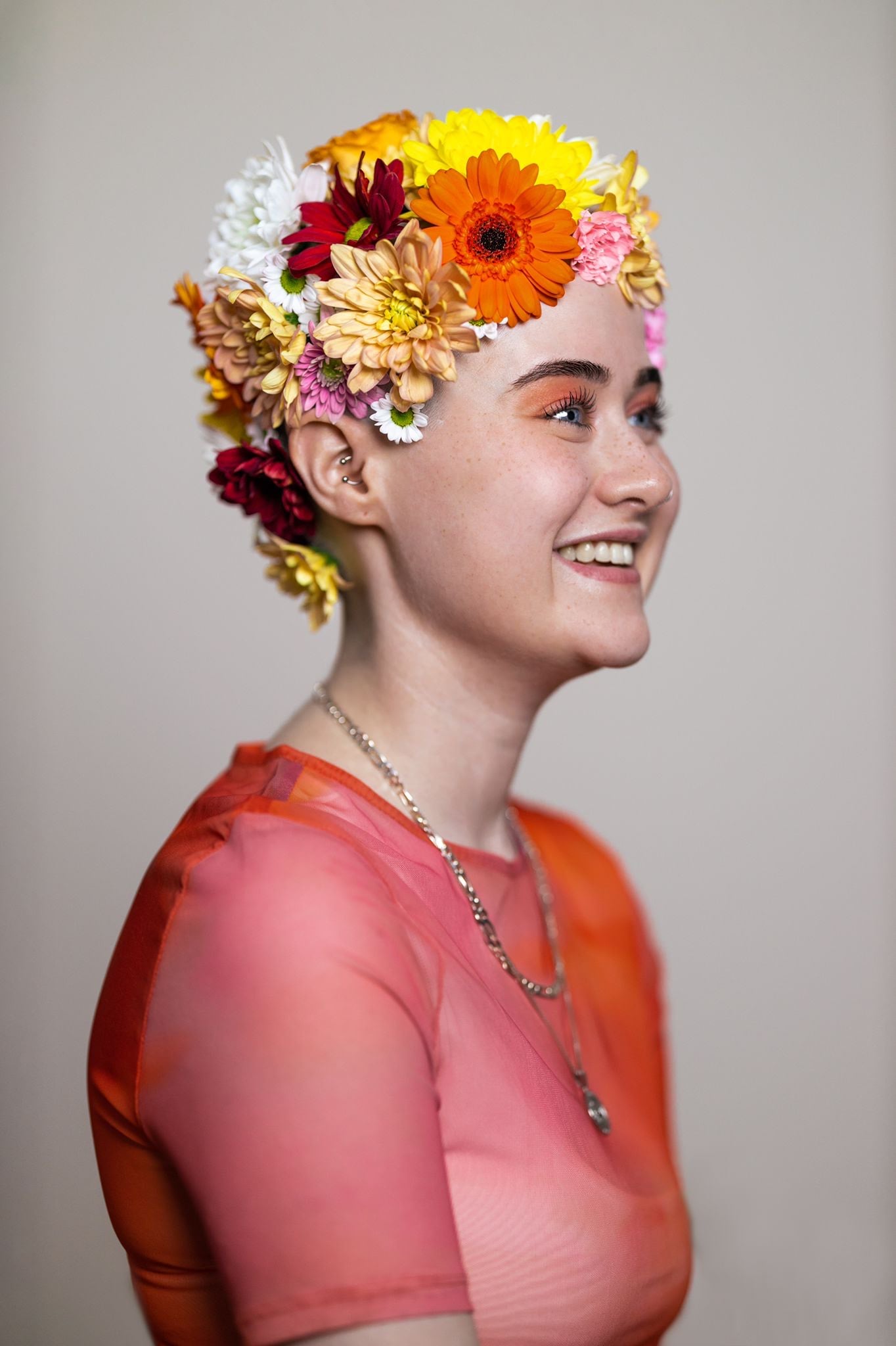 Too often, the best beauty stories go Untold, solely based on a person’s skin color, religion, gender expression, disability, or socioeconomic status. Here, we’re passing the mic to some of the most ambitious and talented voices in the industry, so they can share, in their own words, the remarkable story of how they came to be — and how they’re using beauty to change the world for the better. Up next: content creator Michelle Rowe.

I was born in Basildon, England, but later moved to Billericay where I’ve spent most of my life. I had the best childhood I could possibly ask for. I was surrounded by loved ones and constantly on the move. I was doing everything from swimming club to joining an all boys football team and even regularly going to karate.

Fast-forward to when I was 20 years old; one day, my girlfriend showed up to my house, and her first words to me were: “You look like a man.” I was very confused until she added that I had an Adam’s apple. I turned to look in the mirror, and I did in fact have a tennis-ball-size lump in my throat. I have no idea how I missed it. We immediately went to see a thyroid specialist who did an ultrasound and told me he’d never seen anything like it before. After a few biopsies, we concluded that it was because I had stacks and stacks of tumors piled up in my neck. I was then diagnosed with stage four non-Hodgkin’s lymphoma, a type of blood cancer.

The first thing I thought about when I was diagnosed was losing my hair. It had been very long all of my life, and it felt like a huge part of my identity. I was also particularly attached to it because, at the time, it felt like one of the only feminine elements of my identity that protected me from homophobia. I always thought that if I kept my hair long, my queerness would be questionable enough that people wouldn’t target me. In my mind, if I was a tomboy who also had short hair, it would be like having a giant spotlight on myself. So the idea of having no hair definitely made me panic.

After having gone through the loss of my hair, in all honesty, it did suck at first. I remember being in the hospital three weeks after my first chemo infusion because I had also gotten sepsis. It was there that my hair began to fall out in huge clumps. It was basically like I had a fake pet cat on the end of bed at all times. Weirdly enough, my first response to that was fascination. It’s such a bizarre feeling, pulling it away from your scalp with no resistance — it almost feels like a dream and is strangely satisfying. Then after the initial “Wow, what a weird sensation” wears off and I caught myself in the mirror looking like Gollum from “The Lord of the Rings,” the terror kicked in. That’s when I started scrimping and scraping, wondering if I could rock a grandad’s comb-over to cover the bald spots. 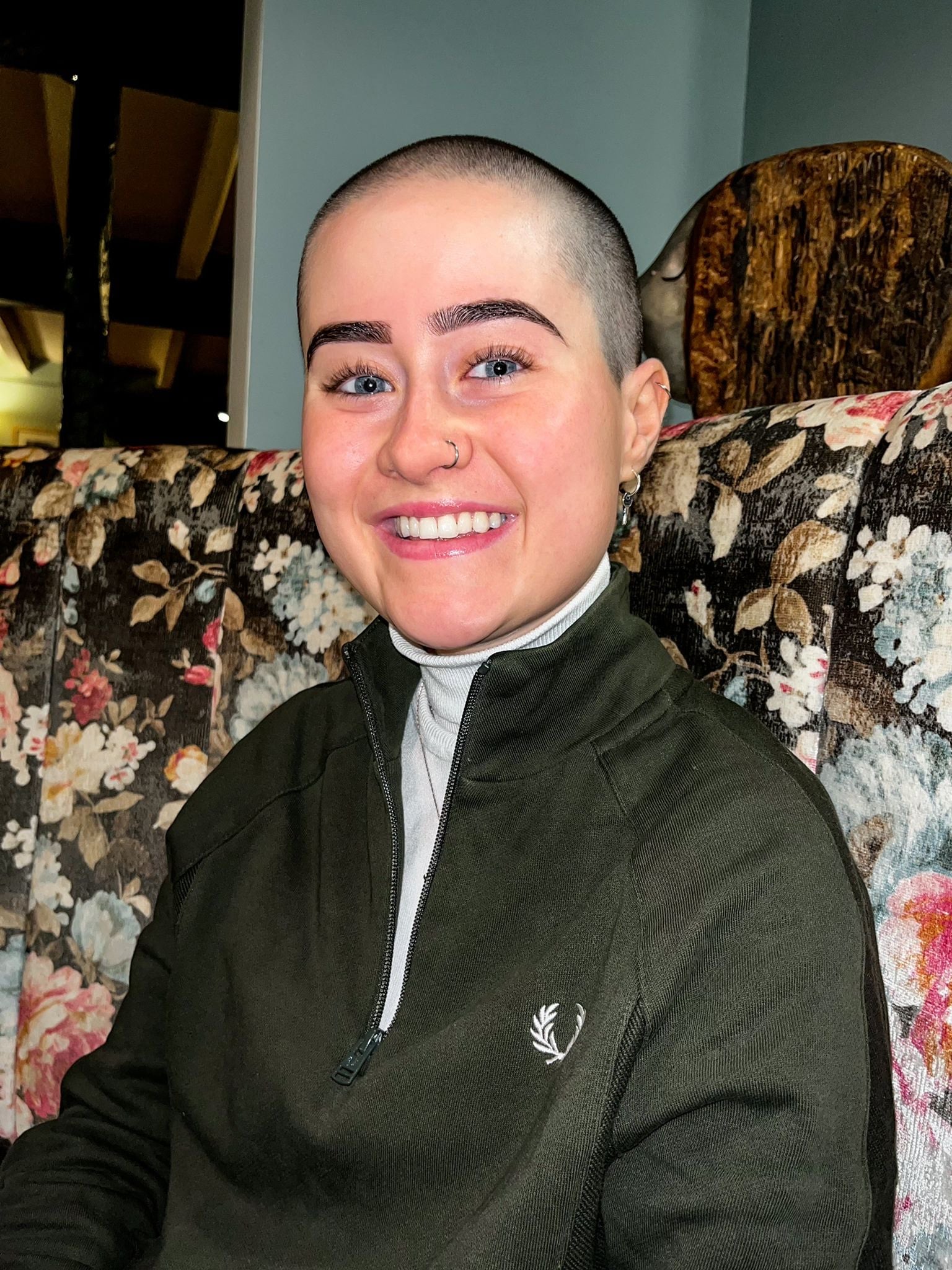 Attempting to shampoo my hair while it was falling out was a real low for me, and I think that’s what marked a point of no return. I couldn’t even really wash it because so much of it was coming out that it wrapped my hands and almost tied them together. I remember my mum coming into the bathroom to find me sobbing on the floor, accepting that there was no chance I would have anything left. So, as soon as I was discharged, I went straight to the hairdressers and buzzed it all off. I couldn’t bare another evening of pulling hairs from every crevice of my body, including — but not limited to — my bum crack.

But the strangest things happened after cutting my hair off: I felt this rush. I looked in the mirror and almost had this moment of gender euphoria. It just felt right. I had planned on leaving the hairdressers hiding my shameful shining scalp under a beanie, but I didn’t. I strutted out onto the high street with a patchy buzz cut that I thought looked pretty hardcore.

My interest in beauty only actually began after being diagnosed. For the first time ever, I felt very freed from all the societal standards of beauty, and that’s when I discovered self-love. I was sick. I wasn’t supposed to look like a runway model — and no one expected me to. I could breathe a sigh of relief because of that fact that if I left the house bald, sweatpants on, moon face in full swing due to steroid bloat, that if someone said something mean, then that only reflected badly on them. It forced me to really look inward and examine who I was as a person.

Although I was far from perfect, I realized that I liked that person. I had spent so many of my teenage years picking apart every detail of myself that it clouded all of the good things I did have to offer. I was then able to start treating myself with a little bit more grace and kindness, and my confidence really grew from there. I finally felt entitled to feel beautiful because of who I was as a person. I was able to finally let go of the things that people said to me or the way they made me feel at school. I felt like I had the answers for once.

When it comes to creating intricate hair videos, the thought behind them is just that you have to be optimistic — sometimes optimism is all you have. Often, I feel like the only reason I have beaten the odds of this disease is due to sheer stubbornness. I don’t care what the numbers say; I love life, and I am not done with it, even if it thinks it’s done with me. So much of the battle is mental, so they’re my way of trying to stay positive.

The looks do take a hell of a lot of patience and time to pull off, so shout-out to my girlfriend who is the mastermind of it all. The longest she ever spent on a style was seven hours for a full head of temporary tattoos; second was the rhinestone look, which probably took close to five hours. The ideas pretty much all come from my comments section. People were submitting so many great requests, and I wanted to keep my followers smiling by fulfilling them.

Doing these videos has definitely made me want to venture more into the beauty industry. Diversity is fundamental to growing our perception of beauty, and I want to be a part of that change. The media we consume has such a profound effect on our sense of self, especially to impressionable children, so I want every young person to be able to see someone like them represented on screen or in magazines and know that they are beautiful, especially if they are different. I really want to encourage people to embrace the things that make them unique. The very things that people would have teased me for at school are the things that make me successful and “beautiful” now.

My message to people would be to stand your ground. Stop waiting for your nose, body type, or skin color, to come into fashion. We are human beings, not trends. When you really find that love for yourself, no one else can tell you any different.